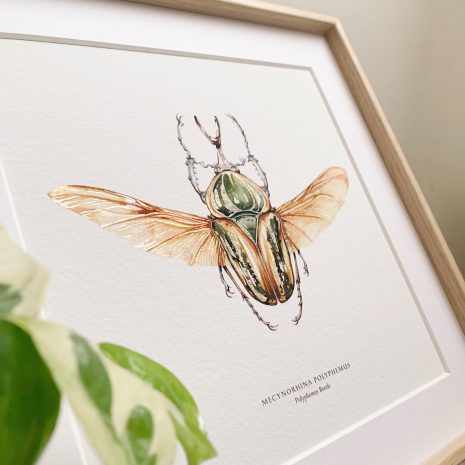 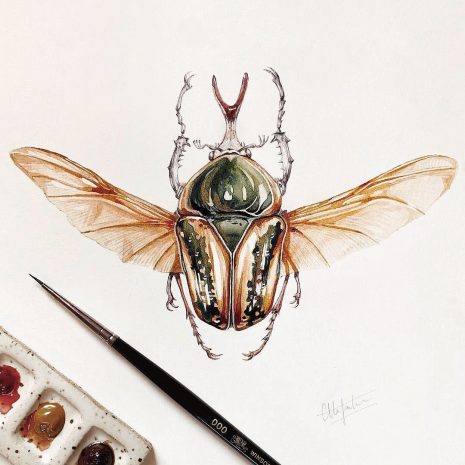 Hand-gilded giclée print, painted with liquid metal accents.
Signed by the artist. Each print comes with a certificate of authenticity.

This edition limited to 15 pieces, is sized at 23 x 23cm,
and is printed on archival Hahnemühle German Etching paper.

The Polyphemus beetle is a large scarab beetle from the Cetoniinae family. First identified by Fabricius in 1781, this species is most commonly found in dense tropical forests across the African forests. It’s also been known by several other names: it was first called the Giant African Fruit beetles, thanks to its diet of fruits and tree sap. It takes between 4 – 6 months for a Polyphemus to go from egg to full grown beetle, and once an adult it will live for 2 to 5 months.

Polyphemus takes its name from Greek mythology. The original Polyphemus was the one-eyed giant son of Pseidon and Thoosa; in fact, he was one of the Cyclopes described in Homer’s Odyssey. Odysseus drugs and blinds Polyphemus after the giant ate several of his men. He later escaped by tying himself to the underside of sheep.

The old English name for beetle was ‘bitela’ – literally, ‘a little biter’.

The original Polyphemus Beetle artwork was painted in watercolour in 2019, and is the same size as the limited edition midi print.